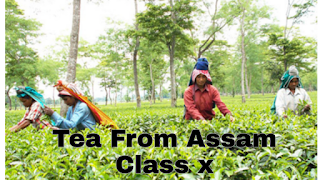 1.Who wrote the prose piece "Tea From Assam"?
2. What is Pranjol's father?
3.Where did Rajvir come in accompaniment with Pranjol?
4.What was read by Pranjol in the train compartment?
5. Name the place which amounts to the largest concentration of tee plantations in the world.
6. Who is Bodhidharma?
7. What was tea looked at in Europe?
8. Name the tea garden managed by Pranjrs father.
9. What was the sprouting period of tea plants?
10. Where do the tea pluckers put the tea leaves?
11. Describe the Chinese legend about tea ?.
12.Describe the Indian legend about tea.
13. How are Pranjol and Rajvir related'?
14. How many tea gardens are there in Assam?
15. Who discovered tea?
16. When did tea came to Europe?
17. What is a cattle bridge?
18.What did Rajvir see after the train pulled out of the station?
19. What is the legend about the Chinese emperor?
20. What is the Indian legend about tea?
21.How did tea originating in China spread to calurope and hew was it used in Europe.
22. Give brief description of a tea garden.
23. What are the legends about tea?
24. Give a brief description about the Legends regarding the discovery of tea
Or
Narrate briefly Rajvir's remarks' on the discovery of tea and the legends that surround it.

Ans: There is, an Indian and a Chinese legend regarding the discovery of tea.
Bodhidharma. an ancient Buddhist ascetic cut off his eyelids because he felt sleepy during meditations. Ten tea plants grew out of the eyelids. The leaves of these plants when put in hot water and drunk banished sleep.
Once there was a Chinese emperor, who always used to boil water before drinking. One day a few leaves of the twigs burning under the pot fell into the water giving it a delicious flavour. It is said that they were tea leaves.

Ans: (1) These words are usually heard in the railway stations.
(2) Here, Pranjol was the listener of those words although most of the passengers of the compartment those words.
(3) I he listener said to the speaker - "Give us two cups"

26.Give a description of Dhekiabari tea-garden as seen by Pranjal and Rajvir when they were driven through it.
Ans- Rajvir with Pranjal arrived at Mariani station by train on their way to Dhekiabari tea estate. Pranjal's father, the manager of Dhekiabari tea estate drove them off in his car from the station to the garden. After an hour's travel, the car sharply turned off the main road. They crossed a cattle bridge and entered Dhekiabari tea estate along a gravel road. On either side of the gravel road, Rajvir feasted his eyes on the vast acres of land of neatly prunned tea plants of equal height. He also saw, groups of plastic apron worn pluckers with baskets on their back plucking the newly grown tea leaves. Pranjal's father then appreciated Rajvir's good knowledge about the sprouting period of tea leaves in Assam before their journey came to an end. In short, Rajvir's journey from Mariani station to the tea estate was full of thrill and exitement.


27. What is the Indian legend regarding the discovery of tea?
Ans : The Indian legend is associated with Bodhidharma. an ancient Buddhist arcetic. He felt sleepy during meditations So he cut off his eye lids. Ten tea plants grew out of the eye lids. When the leaves of there plants were boiled the liquid drove away sleep.