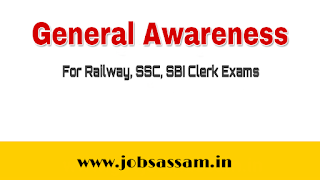 1. Most important responsibility of a Welfare State is
(A) to preserve private property
(B) to promote religion of the people
(C) to check exploitation
(D) to check encroachments on Fundamental Rights

2. Sea water is saltier than rain water because
(A) rivers wash away salts from earth and pour them into the sea
(B) sea beds have salt producing mines
(C) sea animals are salt producing
(D) the air around the sea is saltish

7 Typhoons are common in the
(A) Arctic Ocean
(B) Seas of China
(C) Mexican Japan
(D). Indian Ocean

8. Which of-the following is not a characteristic of Indian agriculture ?
(A) Multiplicity of crops
(B) Predominance of large farms
(C) Over dependence on nature
(D) Low level of. productivity

9. Conversion of sound energy into electrical energy is done by
(A) Solar cell
(B) Gramophone
(C) Microphone
(D) Loudspeaker.

10. A small gap is -left at the joints of rails in a railway track to
(A) avoid the tracks being distorted-due to seasonal temperature variation
(B) avoid the heating of tracks to high temperature
(C)control the speed of train
(D)keep the rails equidistant

11. The removal of soil at a rate faster than its formation is
(A) soil erosion.
(B) accelerated erosion.
(C) lateral erosion.
(D) None of these.

14. Which one of the following is called the amphibian in plant kingdom ?
(A) Algae   (C) Bryophyta
(B) Fungi   (D) Pteridophyta

16. National Institute of Nutrition is a research institute located in the State of
(A) Andhra Pradesh   (B) Himachal Pradesh
(C) Madhya Pradesh  (D) Uttar Pradesh

17.Which of the following is called the 'Crossroads of the Pacific' ?
(A) Tonga (C) Hawaii
(B) Fiji (D) Ellice

18. Which one of the following is an act of man that disturbs the ecological balance ?
(A) Vanamahotsav
(B) Afforestation
(C) Lumbering
(D)Social forestry