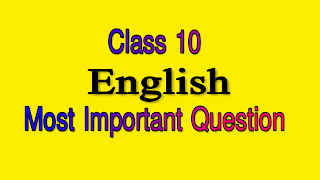 5. What did Lencho write in his letter to God?
Ans: Lencho wrote to God that without his help, his family would die of hunger. He also added that he needed a hundred pesos for cultivation in his field. He narrated the damage the hailstorm had caused to him.

6. Describe the Indian legend about tea?
Ans: The legend narrates that Bodhidharma, an ancient Buddhist ascetic, felt sleepy during his meditation. There upon he grew angry cut off his eyelids. Ten tea plants grew out of his eyelids.
When the leaves of these plants were boiled the liquid drove away sleep.

7. Why does the conductor refer to Valli as 'madam"
Ans: The conductor was a jolly person. When Valli paid thirty paise as fare like other passengers, he realised her sentiment. Valli claimed that she was not a child. Therefore, the conductor jokingly
called her madam.

8. Is Amanda an orphan? Why does she say so?
Ans: Amanda is not an orphan.
She visualizes that she would have been freer if she were an orphan. She says so, because she is dissatisfied with her parents.

9. What are the 'tokens' that the poet says....
Ans: Human qualities and virtues are like some valuable tokens.Once men possessed innocence and simplicity. Now, they have lost these features, as they have become materialistic. The poet observes that these qualities are still present among animals.

11. What is meant by 'plump deer'?
Ans: A 'plump deer' refers to a healthy deer with fleshy body.